The Best Alternatives to Notepad++ for macOS 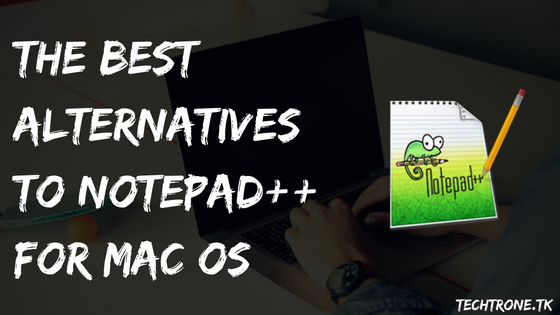 Notepad++ is one of the most popular code editors for Windows. Its customizable GUI, syntax highlighting and syntax folding, multi-document and multi-view, and macro reading and playback features, make it one of the most versatile text editors for Windows. Notepad++ is so popular that it has an extremely passionate fanbase who refuses to use anything else other than Notepad++. That said, Notepad++ is not available for macOS. So, if you are switching from Windows to macOS, what do you use instead? Well, there are a ton of text editors on Mac which are on par and even better than Notepad++. So, if you are looking for one, here are 10 best alternatives to Notepad++ which you can use on macOS:

For me, Atom is the one true replacement for Notepad++ on macOS. First of all, Atom is an open-source software which is completely free to use. It is modern and approachable and yet hackable to its core. Atom is a really powerful text-editor, which comes as no surprise, as it is developed the GitHub team. The best part about Atom is that you can change almost anything about it. You can install different themes to change its look and feel, tweak the look and feel of your UI with CSS/Less, and even add major features which fit your workflow using HTML and JavaScript. 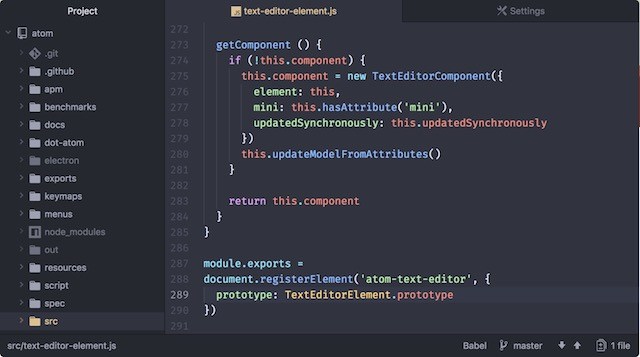 At its core, Atom is built on HTML, JavaScript, CSS, and Node.js integration and runs on Electron. Although the software is already feature rich, if you want more, you can install any of its thousands of open-source packages to add new features and functionality. Some of the popular packages add features like Git conflict management, project management, modal control, customizable clock in the status bar, cleaning up your code to make it more readable, search Stack Overflow, and more. Lastly, since the app is developed by the team at GitHub, you can be sure that Atom will receive support and regular updates for the foreseeable future.

If you are looking for a Notepad++ alternative on Mac, chances are you must have heard of Sublime Text. Sublime Text is one of the most respected text editors on Mac and brings a ton of features like syntax highlighting and folding, a high level of customizability, easy to navigate interface, multiple selections, powerful API and package ecosystem, and more. In fact, if not for its price, Sublime Text would have been our top pick for as the Notepad++ alternative.

My favorite feature of Sublime Text is the “Goto Anything” feature. The Goto Anything feature can be activated by hitting the simple keyboard combo ⌘P and allows you to instantly jump to symbols, lines or words. Combine this with features like split editing, Goto Definition, Command Palette, batch editing, and instant project switch, you have one of the best and most powerful text-editors out there. Sublime Text is also cross-platform and works on all the three major platforms including macOS, Windows, and Linux. And although Sublime Text is a bit pricey, you only need to buy one license to use it on all the computers that you own.

Brackets is a great free text-editor for your Mac which mainly focuses on web-design and hence a good option for front-end developers and web designers. Although Brackets has been designed by Adobe, it’s an open-source project which is supported by its active and passionate community. Probably the best feature of Brackets is Live Preview. The Live Preview feature allows a developer to instantly see the changes he is making to his code. When you are using the Live Preview feature, Brackets will open a Chrome window which will automatically reflect any changes to CSS and HTML of your code. It’s a great way to visualize your code.

Another great feature of Brackets is Extract which lets you automatically get color, font, gradient, and measurement information from a Photoshop Document file. Other features include Inline Editors, Preprocessor Support, Quick Edit, JSLint and more. But that’s not all, just like you can add features to Atom using packages, Brackets lets you do that with its extensions. Some of the most popular Brackets’ extensions are Beautify, Autoprefixer, Emmet, Minifier, Bracket Gits, and Brackets File Icons. You can get a full list of extensions here.

UltraEdit claims to be the world’s best text-editor and while I do not agree with its self-proclaimed title, it is one of the best text editors out there. One of the best things about UltraEdit is that the program supports a ton of different languages including and not limited to C, Objective C, Javascript, XML, PHP, Perl, and Python. It also brings a ton of features including code highlighting, folding, disk-based text editing, theming, support for retina display, spell checking, drag-and-drop editing, and block mode editing among others.

When buying UltraEdit, you can also buy it with other Ultra products like UltraCompare, UltraEdit Suite, UltraFinder, and IDM All Access. Different bundles bring different functionalities. For example, UltraCompare helps you see the history of all your projects and documents and lets you compare your files from any point in time. You can learn everything about UltraEdit bundles by clicking here.

BBEdit is one of the oldest and most popular text-editors out there. The software has been available since 1992 which long predates the macOS as we know today. BBEdit’s existence for more than 25 years is enough to sing its praise. It’s one of the best HTML and text editor for macOS which anyone can use today. Along with simple text editing, the app also supports rich text editing and HTML. 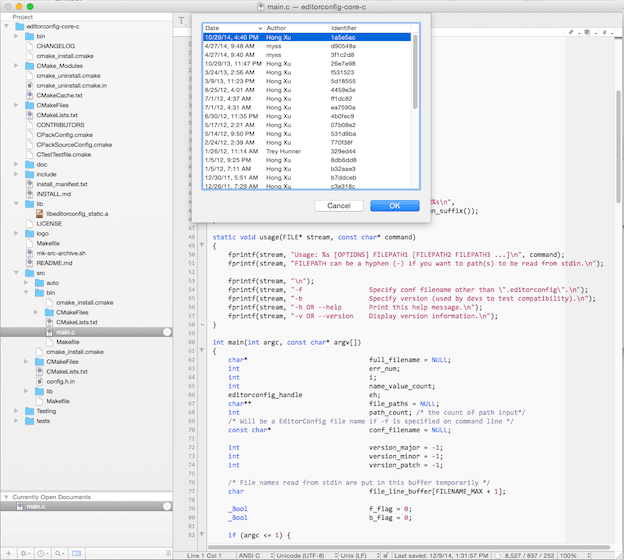 The app itself is packed with features including built-in tools text manipulations, Hard Wrap, complete set of HTML Tools for fast, easy, and correct markup, placeholder options for easier site maintenance, multiple files manipulations, customizable syntax coloring support for over two dozen built-in languages, extensive file handling capabilities, and more. The app comes with a one-month free trial, so you can thoroughly test the software before you buy it. If you want to use BBEdit but cannot afford to buy it, you can use TextWrangler which is a product from the same company and is built on the same technology which is used in BBEdit. It just has fewer features than BBEdit.

If you are looking for a powerful yet cheap text-editor build specifically for Mac, look no further than Textastic. It’s the cheapest paid text-editor on this list and has been designed specifically for macOS. The app supports more than 80 source code and markup languages with auto-completion support for HTML, CSS, JavaScript, PHP, C, and Objective-C. The app is also really fast as it uses the native macOS APIs like Core Text for maximum speed. 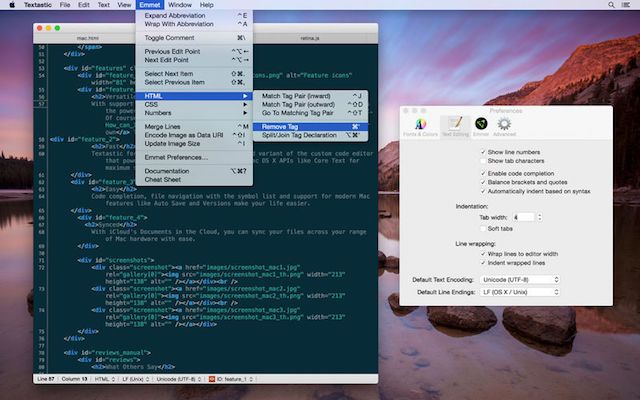 One of the best features of this app is that it supports iCloud sync, ensuring that your work is synced across devices without you having to do anything. Apart from being present on Mac, Texastic also has an iOS app which works on both iPhones and iPads. However, the biggest thing that goes in favor of Textastic is that it brings most of the features of premium text-editors at a fraction of their price.

Coda 2 is a text editor which is a hard-core tool for all the web developers out there. Coda 2 has all the usual features including. Features like project-wide autocomplete, syntax highlighting for tons of languages, code folding, find and replace, indentation guides, automatic tag closing, and fast commenting and shifting of code. 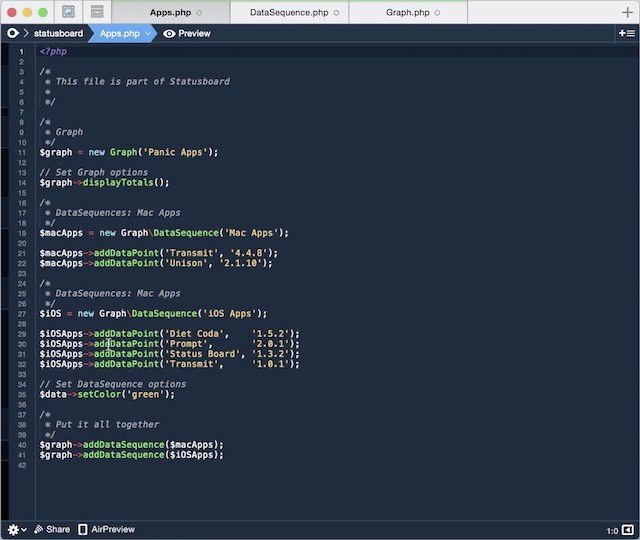 But that’s not all, apart from features which we have come to expect from a good text-editor, Coda 2 brings features specifically designed for web developers. For example, Coda has a deeply integrated file management. Devs can not only open local files, but they can also edit remotely on FTP, SFTP, WebDAV, or Amazon S3 servers. There’s also a built-in WebKit Preview which includes a web inspector, debugger, and profiler. Finally, Coda 2 also supports and has an extensive list of plugins which can be used to add a ton of extra features.

For a product which is created by Apple’s arch-rival Microsoft, you would think that it won’t be working well on macOS, if working at all. However surprisingly, Visual Studio Code is one of the best text-editors you can get on your Mac. It supports highlighting for more than 30 different languages, keyboard-centric and code-focused editing, lightning fast source code editor, Regex support, outlining, autocomplete with IntelliSense, automatic real-time API description, Git control and more. 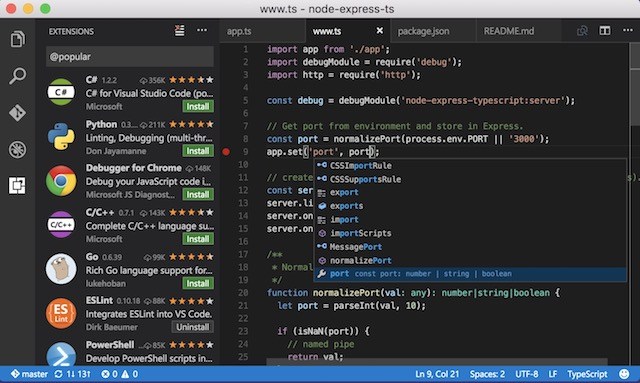 Visual Studio Code also supports extensions which can add a ton of extra functionalities. Some of the most popular extensions are Git Lens, Angular Essentials, Sublime Text Keymap, and Debugger for Chrome. Oh, and did I tell you that it’s completely free?

The Best Alternatives to Notepad++ on macOS

That concludes our list of the best Notepad++ alternatives for macOS. As you know, there can never be a single app which is best for everyone. That’s why I would suggest that you try a couple of them to see which one fits your needs. Since most of the paid ones also offer a free-trial period, it will be easy for you to try and choose the right one for you. Believe me, you don’t want to invest too much money or time in a text-editor only to find out that it’s not the one. Try them out and do let us know which among them is the one you are going with.