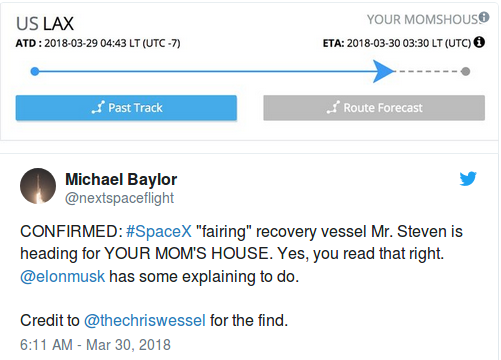 SpaceX is flanking the weekend with two launches from opposite coasts — the first of which is taking place this morning from California. A used Falcon 9 rocket is set to launch 10 Iridium telecommunications satellites from Vandenberg Air Force Base. And then SpaceX will do it all over again with a Falcon 9 launch from Florida on Monday, sending supplies to the International Space Station.

The company won’t be recovering its rocket today, but it will try to capture part of the vehicle’s nose cone — the bulbous payload fairing that surrounds the satellites during launch. SpaceX owns a boat named Mr. Steven (really) that’s equipped with a giant net to catch the fairing when it falls back to Earth. Once the rocket reaches space, the fairing breaks into two pieces, each of which deploys a parachute-like material known as a parafoil to slow down. Mr. Steven will then try to grab one half of the fairing before it hits the ocean. (Presumably, SpaceX will get another boat once it masters the process.)

This will be the second attempt by SpaceX to snag part of the payload fairing. The company tried the trick for the first time in February, but the nose cone piece just missed the boat by a few hundred yards. SpaceX CEO Elon Musk argued the problem could be fixed by making the parafoils bigger. This week, hawk-eyed SpaceX fans noticed that Mr. Steven was traveling to a special location in the Pacific Ocean to get in position for today’s launch. And those tracking the ship’s whereabouts online yesterday found that Mr. Steven’s final destination had been relabeled to “Your Mom’s House.”

As for the launch, it’s one that SpaceX has done many times before. The company holds a contract to launch 75 of Iridium’s NEXT satellites into lower Earth orbit, to replace an existing constellation. Of those, 66 will make up the primary NEXT constellation, providing comprehensive telecommunications services to the US government and commercial companies, while nine additional satellites will serve as backups in orbit. SpaceX has been launching these satellites in batches of 10, and this will be the fifth set to go into space. In fact, the same Falcon 9 rocket going up today was used to launch the third group of Iridium NEXT satellites back in October.

SpaceX has an instantaneous launch window for this mission set for 10:13AM ET, so the rocket has to go up at that exact time or fly another day. The company has a backup launch date set for Saturday at 10:08AM ET. But so far, weather seems to be looking good for a launch today, according to Iridium’s CEO Matt Desch. SpaceX’s livestream will begin about 15 minutes before take off. And don’t worry, if you can’t catch this mission today, just wait until Monday for the next Falcon 9 launch.