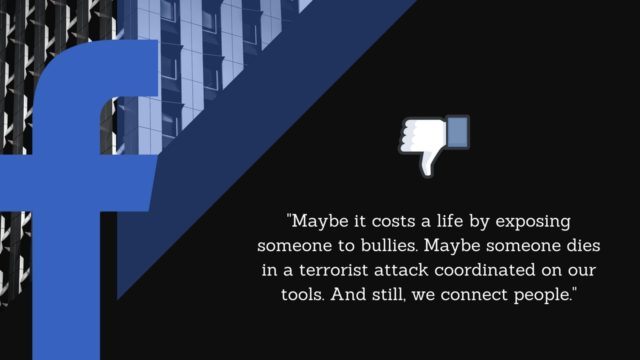 Facebook Vice President Andrew “Boz” Bosworth is known for being blunt and direct at Facebook’s meetings. His Twitter description calls him “co-inventor of News Feed, Messenger, Groups, and more.” In early 2016, he circulated an internal memo that has been obtained and published by BuzzFeed News. The nature of the memo is explosive and it tries to justify all possible means used for Facebook growth.

The memo is titled “The Ugly,” and it has remained inside the walls of Facebook prior to this leak. The memo states that the aim of Facebook is to connect people. Hence, all the work done in this process is justified. The existence of this memo becomes even more in the light of ongoing Facebook CA Scandal.


“All the questionable contact importing practices. All the subtle language that helps people stay searchable by friends,” he wrote about the company’s questionable data collection practices.

That’s not all. He further tried to “inspire” his employees by saying that company’s growth was important, even if Facebook’s tools end up being used to coordinate terrorist attacks or bully someone.

In a tweet, Boz has accepted that he wrote the memo. However, he no longer agrees with the memo, and even didn’t agree with its content when he wrote it. He defended the memo by calling it a way to start a discussion.

Talking to BuzzFeed, a former senior Facebook employee said that the “memo is classic Boz” and it represents how the majority of Facebook employees think. “This is clearly a post meant to rally the troops.”

Mark Zuckerberg has also responded in the form of a statement. He called Boz a talented leader who says provocative things. However, Zuckerberg and most of the employees disagreed. “We also need to work to bring people closer together. We changed our whole mission and company focus to reflect this last year,” he added.