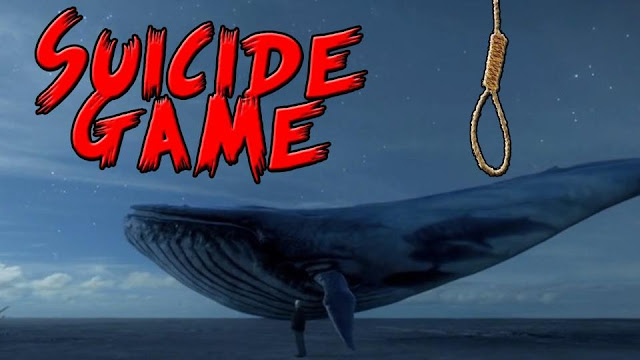 A game called Blue Whale suicide challenge targets those who are depressed and turns suicide into a thrilling game. As a 14-year-old jumps off the terrace in Mumbai, police suspect that the psychopathic network has spread to India. - Tech Trone

Something macabre has been brewing on the internet, and it sounds like the perfect plot for a third rate horror film. A depressed youngster comes across a social media group called Blue Whales. The group encourages him to take his life. It also promises to make his exit from this world fun by turning the suicide into a thrilling game. After signing up, the youngster is assigned daily tasks for the next 50 days. It includes inflicting self-injury, watching horror movies, waking up at odd hours to wrap the task and even carving a whale shape on the arms. The task keeps getting tougher with each passing day. On the last (50th day), the game admin ask the youngster to commit suicide. Those who want to back out on the last day are threatened that their family members will be hurt if they don’t abide by the game rules. There is no exit.


It seems that the deadly game that originated in Russia has taken the life of a 14-year-old boy in Andheri East, Mumbai. Manpreet Singh, who jumped off the terrace of a seven-story building on Saturday, could be the first victim of the network.

This psychopathic game started in Russia four years ago on a social networking site called VKontakte. It has already claimed over 130 lives in Russia. It allegedly led to its first suicide in 2015. Philipp Budeikin, a psychology student claimed that he invented the game. Budeikin, who was thrown out of his university, said he was attempting to weed out the society by encouraging those who have no value to take their lives. Other reports claim that the mastermind behind the game, a postman called Ilya Sidorov, 26, was arrested in Moscow, Russia. He used to encourage teenagers to hurt themselves and eventually commit suicide.

What is worrying is that despite the common knowledge that the deadly game started and spread on VKontakte, which is a hugely popular site in Russia, no checks were brought in place to contain the network. One can easily create a VKontakte account . And once you log in, and search for #bluewhale, you come across psychotic, extremely depressing messages of young people desperately wanting to play the game and end their lives. Their profiles are as macabre as it can get. There are pictures of self-injury, ghosts and horrifying sketches of people bleeding and trying to kill themselves. 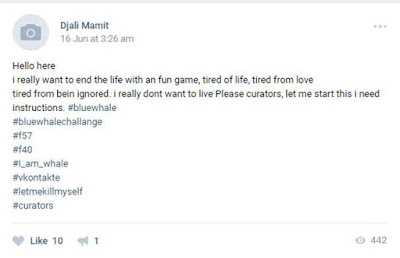 When this journalist created an account on VKontakte, and asked a few users about Blue Whale, she was sent a link to a page that claimed to add people to the Blue Whale network. The page was full of eerie sketches, including one that showed a bloodied male figure hurting himself with a knife. The curator of the page called Aisha Andrew chatted with her, and told her that there can be no looking back once a person begins the game. The first task that she was assigned was to carve ‘F57’ on her arm with a blade at 4:20 am and send a picture. Here are the screenshots of the chat: 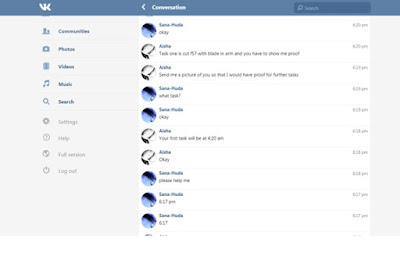 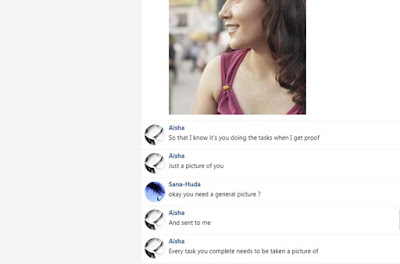 Dr Pulkit Sharma, psychologist, says that we need to immediately ban access to such social networking sites. “It’s important to restrict such content. When a person is depressed, he or she is in a very fragile state of mind. Anyone who seems powerful to them and comes across as an anchor point, can have the potential to influence their mind. When you tell a depressed person that he can live, and there is hope, they don’t find such words to be realistic. But if someone tells him that he is fit to die, and there is nothing wrong is seeking liberation and suicide is an easier, logical way out, he immediately relates to it. Exposure to such content is extremely dangerous for depressed young people.”

Sharma says that the network seems to be a creation of a psychopath. “Such people believe that they are larger than life. They are on a special mission and they have a weird agenda that makes sense to them. They are fanatical and psychopathic. They see things in extreme, in black and white, the way the alleged creator of the Blue Whale network believes that if he eradicates depressed people, this world will be a happy place,” he says. Such a psychopathic mind could be an outcome of extreme childhood abuse, neglect and trauma.

Watch out for signs of depression and suicidal tendencies:

Feeling low most of the time