November 25, 2017
We all know very well that generally in our thoughts, there are the most popular names of smartphone manufacturers, however, we ignore other companies such as Oppo, a very popular company in Asia that many users are unaware of. But, Oppo R13 images leak reveals similar design to iPhone X.

Normally in our thoughts, there are the most popular names of smartphone manufacturers, however, we ignore other companies such as Oppo, a very popular company in Asia that many users are unaware of.

We recently discovered the company’s latest smartphone, the Oppo R11s, a device that exceeded the expectations of users and was a success in its pre-sale, getting more than 300,000 reservations in less than 24 hours, a madness.

The Oppo R13 would be the Android version of iPhone X

Some time ago a patent of the company appeared where a small notch was observed in the front of the device, something that we now imagine thanks to the design of the iPhone X. Well, apparently have leaked images of the possible Oppo R13, a smartphone with a design traced to the last device of the Cupertino.

They are still leaks, in addition, the images are not of very good quality, so we always warn of the same, take this information with tweezers because it might not be real. In any case, it is worth seeing and commenting on, because if it were to become a reality it would be the exact copy of the iPhone X with Android OS. 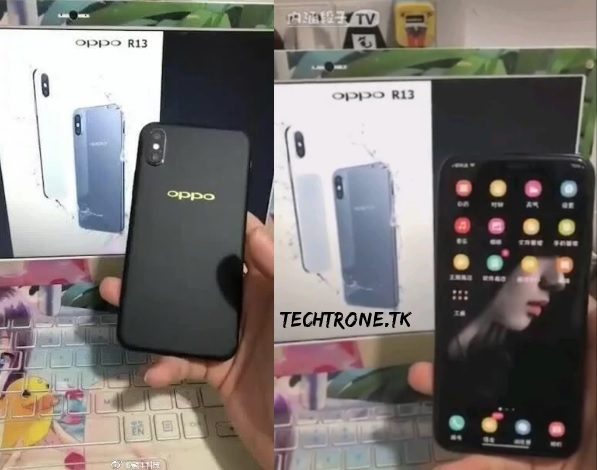 There you have it, does it seem true? Especially the back, where we see the double camera placed horizontally, located in the same position as the iPhone X. You can also see the logo of the company in a striking green.


So, what do you think about this Oppo R13? Do you think it will be real? Simply share your views and thoughts in the comment section below.